Away from frenetic Aldersgate and Barbican high rise blocks, Carthusian Street leads me to this piece of medieval monastic London on this mild May day of brisk bright clouds and broken blue. Most of the lawns in this 2-acre (0.8 ha), 5 sided square are roped off today and the grassy perimeters allowed to run to spring abundance. But the wild flowers and herbage hide the grim past of this piece of former ‘No Man’s Land’ (beyond the City walls). Beneath are the remains of a large 14th century plague pit, known as Pardon Churchyard, the largest mass grave in London during the Black Death from 1348 – 50, containing the bodies of tens of thousands of victims. It was uncovered during deep excavations for the Crossrail project  in 2014.

A nearby field called Spital Croft was acquired by Sir Walter de Manny in 1349 on which he built a chapel and later founded the Charterhouse as a Carthusian priory to commemorate the ‘Great Pestilence’.

I find a park bench under an apple tree, where broken shadow mottles the ground, sprinkled with fallen blossom. Above me, sunshine pierces the canopy and edges the silk pink petals with light. Every slightest puff of breeze scatters pink confetti across the grass.

This is the largest of the 7 green spaces and courtyard gardens associated with the monastery and schools of the Charterhouse and the only one that allows free access to the public. I set up to draw and try to make sense of the complexity of roofs and chimneys and ragstone gables, chequered walls and mullioned windows of the mostly Tudor and Stuart Charterhouse buildings to the north of the square (restored in the 1950s after being devastated during the London Blitz in 1941). The museum entrance with overhanging cherry tree and a sinuous contemporary ironwork entrance gate (I’m told later that this was recently commissioned, was only installed last week and is still waiting for its lantern). And to the right is the Thackeray cafe (named after William Makepeace Thackeray who was a student at Charterhouse School in the 1820s), its outdoor tables full of people lunching in the shade of flapping parasols.

Following the Dissolution of the Monasteries, a substantial Tudor mansion was built here in 1545, the London home of businessman and philanthropist Thomas Sutton. After his death in 1611, the house was endowed as almshouses for 80 poor gentlemen and a school for 40 scholars, becoming Sutton’s Hospital in the Charterhouse. The almshouses remain on the site, although now providing accommodation for 40 residents. Charterhouse School moved away in 1872 to its present site in Godalming.

Construction workers in orange hi- vis stride to and fro across the park. One sits on the bench just behind me and for 10 minutes the crackle and crunch of crisps being eaten is an accompaniment to the sporadic scree of drill and grinder from the Crossrail site just to the south where a new ticket hall for Farringdon Station is being built.

Flies are busy and insistent today, annoyingly pattering my head and dive bombing my sketchbook, maybe made a little mad by the apple blossom scent. My daughter Millie joins me (she’s taken a break from exam revision) and brings me a coffee. And birthday presents and cards (for tomorrow!). We chat for a while. Then she takes out a book to read and I return to drawing. 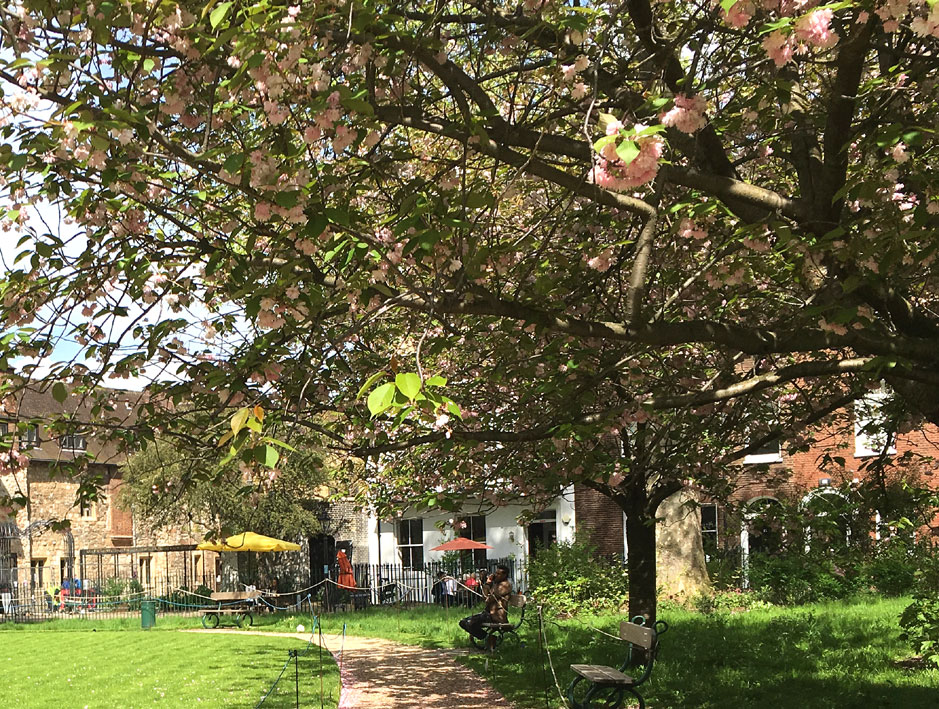 In the 16th century, handsome houses were built around the Square but it did not take shape as a formal residential square until the 17th century when it was laid out with diagonal walks lined with lime trees, bordered on three sides by fine mansions and on the north by the old priory buildings.

The Charterhouse opened its doors to the public for the first time in January 2017. You can visit the museum and chapel and take tours around other parts of the complex, including the Tudor Great Hall and the Great Chamber. The Barts and The London School of Medicine and Dentistry and the Queen Elizabeth II Infirmary care home are also on the site.

Several people, each holding long phone conversations, walk past and carry on around the square, to come back round a couple of minutes later and repeat the circuit several times. A crumpled looking businessman with equally crumpled Tesco bag. A man in a pink jacket. A blue suited girl with knee high boots. All of them walking anti- clockwise around the garden. I watch as they are momentarily enveloped by scrawly shadows cast by the mighty mature plane trees.

The afternoon warms and settles and lulls us. A pair of pigeons amble along the path as if they own it. My drawing is drawing to a conclusion. But then from nowhere a sudden gust of wind riffles our pages and sends a blizzard of blossom across the lawn. The pigeons fly off and, in front of the cafe the yellow umbrella has been thrown upside down against the park railings and tableware sent crashing.