As I leave Vauxhall station a gauze of light rain is being blown across from the river. It eases as I pass between the two black entrance pillars, tall as trees, each supporting a sculptural outline of a Victorian pleasure seeker (photo below). 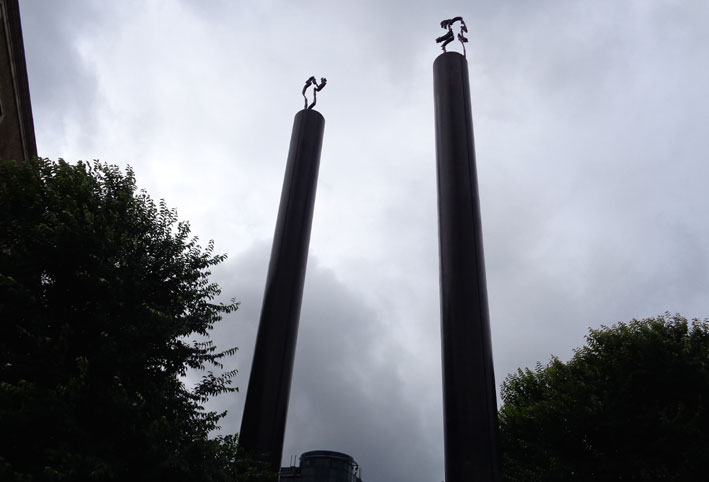 The original garden on this site was in the riverside grounds of Vaux Hall, the stately home of John and Jane Vaux, who were vintners.  Opened to the public in the 1650s as New Spring Gardens by Jane Vaux, following the death of her husband. London pleasure seekers would arrive by boat (it was still a century and a half before Vauxhall bridge was built), to escape the filthy, teeming and stinking city for a few hours and enjoy fresh flower scented air, attractive tree lined walks, shrubberies and fine vistas. Entry was free in the early days, with refreshments sold to support the venture. Sir Samuel Moreland, the inventor, built a central feature for the garden with fountains and a mirrored pavilion. 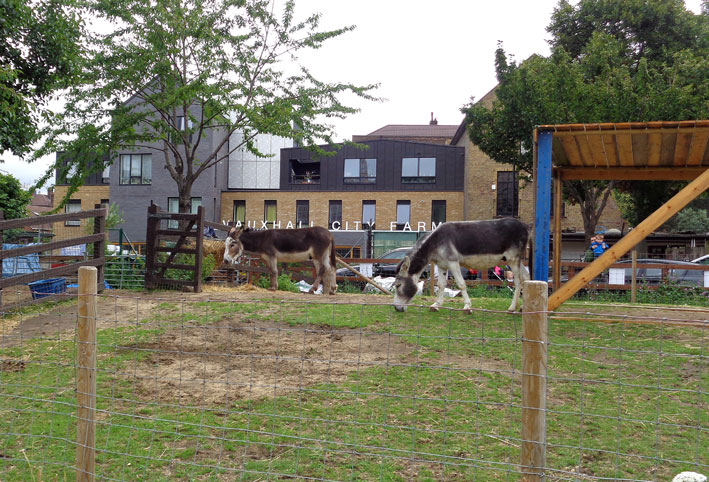 The drizzle eases and I trace a tour around the wide undulating lawns, past the riding paddock where a horse stretches out to nibble at the hedge. And the Vauxhall City Farm where damp donkeys nod and bray in earthy pastures. I turn and take in the view across the width of the park to its westmost fringe, where trees partially obscure the mainline railway embankment. And rising behind, the angular blocks of Albert embankment riverside buildings, including the ‘legoland’ postmodern castle of the M16 HQ, behind which the sky is deepening to a threatening pewter. The breeze picks up and rain comes again, more insistent this time. I scurry to the hopeful shelter of the trees which fringe the crescent ridges that bound the western edge. 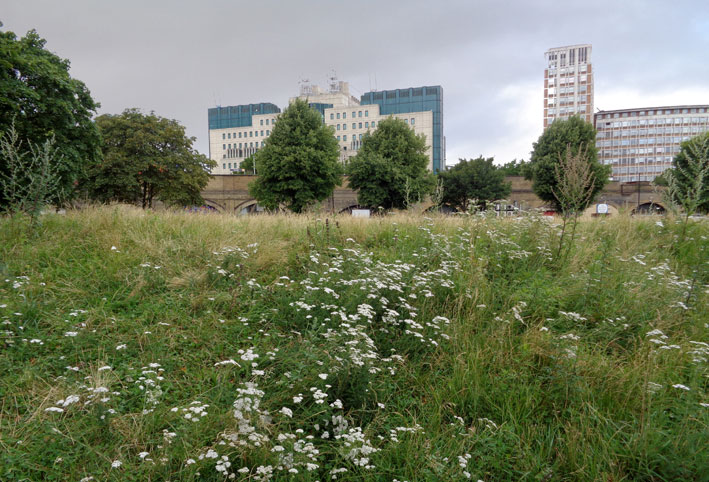 It’s relatively dry under the dark canopies of horse chestnut trees and maples which grow thickly all along the ridge top. I scramble down the slope and set up to draw under one of the procession of lime trees on the path towards the Tea House Theatre (cafe and events venue, set up in 2011 in the premises of a Victorian pub which opened here after the pleasure gardens closed). People are scattering away under umbrellas. A few raindrops percolate through but it’s mostly dry under here. The anaemic light and chill breeze makes it feel less July and more like February and I’m wishing I’d brought a jumper!

By the early 18th century, the gardens had developed a reputation for impropriety. The secret walks and hidden bowers made this a perfect location for furtive liaisons. The author, John Lockman described it as little more than a “much frequented rural brothel”. Around 1730 it was taken over by entrepreneur Jonathan Tyers (who had made his money trading leather in Bermondsey. See ‘Sticks in the Smoke’ 58). He wanted his pleasure garden to become a “rational, elegant, and innocent” space, a civilised and civilising environment. It was remodelled with help of his friend, the artist William Hogarth, who lived nearby. The garden transformed into a space for performance and display, with specially designed pavilions and  grottoes in the new Rococo style, displays of paintings and sculptures, formal allées and serpentine walks illuminated with many glass lamps. For his inspirational work, Hogarth was given a free pass to the gardens for life.

The Orchestra (see illustration above), an octagonal building designed for the performance of music in the open air, was opened in 1735, the first of its kind in England. Around it in colonnades, were rows of supper-boxes where people could enjoy the music while eating and drinking. Frederick, the Prince of Wales, was a prominent patron of the Rococo and gave his support to the Gardens, having his own pavilion built here. The central grove, with its classical portico at one end, was like “an ancient Greek agora”. It could accommodate 3,000 people. In 1749 a rehearsal of Handel’s Music for the Royal Fireworks attracted an audience of 12,000.  and in 1786 a fancy-dress jubilee to celebrate the proprietor’s long ownership was thronged with 61,000 revellers. With 100,000 visitors each season, the gardens provided London-based composers with their first mass audiences.

Tyers’ sons Jonathan and Thomas took over managing the pleasure gardens after their father’s death in 1767 (the family name is remembered in Tyers Street, on the park’s eastern boundary). The site was renamed as Vauxhall Gardens in 1785. New entertainments included firework displays, balloon ascents, and tightrope performances by Madame Saqui. In 1817 the Battle of Waterloo was re-enacted, with 1,000 soldiers participating. 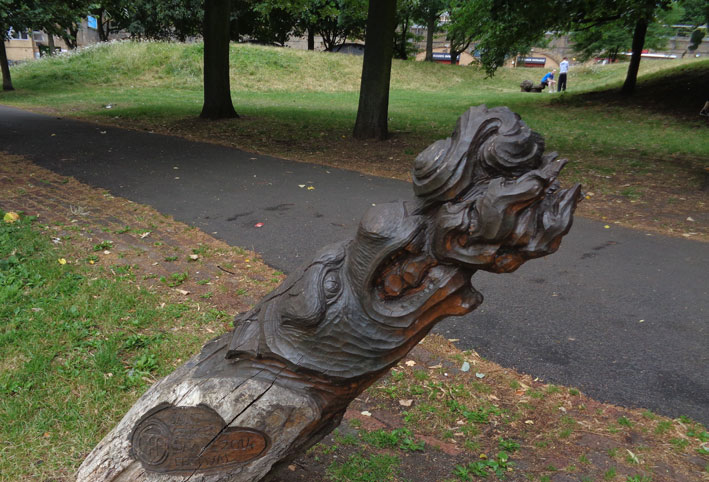 As the shower passes people begin to permeate through the gardens again. A 12 strong female fitness class is being taken through their paces on the damp grass. They stand in a circle and flex their limbs at each other. Two guys carry sheets of cardboard to the top of the tree sheltered hummock. They sit on the cardboard and drink lager while watching the fitness class. On the lawn below them a squirrel is digging for nuts, then sits on its haunches and nibbles at its treasure. Trains are a constant rumble and scree.

The sun emerges and a warmth radiates across the park. I finish the drawing (see top) and pack my things and walk past the tea house and across the middle of the garden. Rough carved wood sculptural pieces sit in the grass, including a fire breathing dragon (from the St Georges Festival, an annual event here since 2012. See photo above). Avenues of trees lead to a central grid of beeches, wet foliage dripping onto stone block benches. Shadows flood the gravel between splashes of sunlight like a Parisian park in the summer. Further on, the scuffed grass ground is patterned with beer bottle tops and laughing gas cannisters. Much evidence of pleasure having happened. Over there the remains of a couple of disposable barbecues. 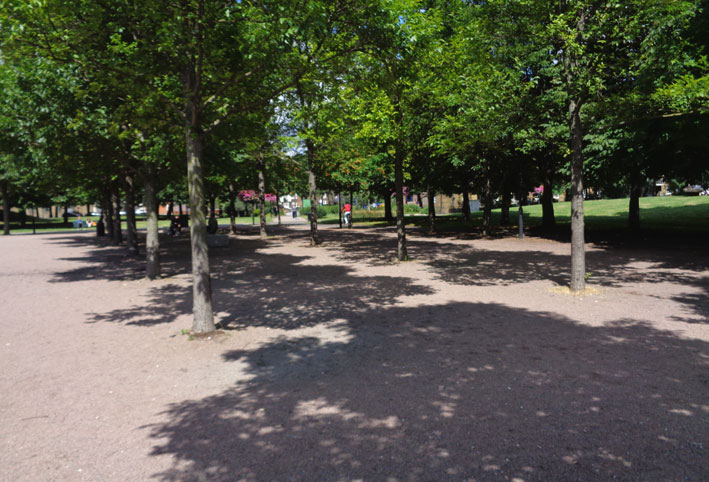 During the early 1800s, Vauxhall Gardens continued under different owners but suffered financially due to competition from the more fashionable Ranelagh Pleasure Gardens (see Sticks in the Smoke 28) and the popular Cremorne Gardens (see Sticks in the Smoke 16), both on the opposite bank of the river. It closed in 1840 due to bankruptcy then reopened and staggered on for another few years, but its fate was sealed with the building of the 2 mile long railway viaduct from Nine Elms to Waterloo Station, creating a curving cliff that severed the gardens from its river frontage. Visitors lost interest and the gardens fell into disrepair and closed for good in 1859. This site, for 200 years the most famous and notorious of all the pleasure gardens, immortalised by Thackeray, Dickens and Hardy, was wound up and its contents sold by auction for £800.

The land was redeveloped in the following decades and built on with streets and some light industry, but wartime bomb damage and postwar slum clearance saw these 7½ acres of the original site opened up as a public park. This was initially called Spring Gardens but renamed in 2012 as Vauxhall Pleasure Gardens.

I walk to the western edge, where Goding Street underlines the viaduct. Grassy banks here are covered with yarrow, bright as snowflakes. I set up to draw, with the contrasting background of the railway arches. Umber bricked. The furthest arches are occupied by the Chelsea Motorcycles shop and garage. Ranks of motorcycles outside. Every few minutes a bike roars down the street, echoed and amplified by the high wall. In the nearer arches is the Chariots Roman Spa, London’s biggest and most popular gay sauna.

A man wearing batman t-shirt has a stick and is systematically patrolling the banks, poking and prodding at the long grass. Every now and then he bends down to pick something up. He pauses to look at my drawing and I ask him what he’s looking for. “Money” he says and shows me a handful of coins. He’s wearing plastic gloves. “Anything valuable I hand in. Found a samurai sword once in Vauxhall Park.” (Vauxhall Park is about 300 metres south of here.)

An insistent call of crows from the nearby stand of horse chestnuts is echoed back from the other end of the park. The exchange goes on for a full 10 minutes. Then one takes flight, right overhead, cawing noisily, a ragged feathered silhouette against the clearing sky.

(In his ‘Sticks in the Smoke’ project, Nick Andrew has been visiting, researching and drawing a different public park or garden in Central London since January 2016. This is leading to a collection of paintings exploring the theme of city green spaces from the perspective of a rural landscape painter which will be shown in a future London exhibition. www.nickandrew.co.uk

3 thoughts on “Sticks in the Smoke 62: Vauxhall Pleasure Gardens, Lambeth”