Until the mid 1800s, Shepherd’s Bush was mostly rolling pasture and woods. Tight growing thickets on common land here were regularly used as makeshift enclosures by weary shepherds on the trek to London’s Smithfield Market, to corral their flocks overnight. From the 1840s, railway lines were driven through these fields with Shepherds Bush station opening in the 1860s, making this prime for development and transformation into Victorian commuter belt.

The paths are wet from earlier showers as I walk through the South Africa Road entrance into this six acre green space, past football and basketball and tennis courts and on, between lawns and cherry trees, a suntrap seating spot where 3 runners rest and an old man in a cap peers into a newspaper on his daily bench. And there ahead, the rounding metal bows of Tim Fortune‘s sculpture, ‘Three Arches’ appear to launch and swoop above the central shrubbery (above). Beyond this point, the park opens out its wings and takes on a different identity: Japanese peace garden, overshadowed by the massive, white tarpaulin clad curving hulk of the old BBC Television Centre (now being converted into flats, offices restaurants and film studios).

At the turn of the 20th century, 140 acres of land here, including brickworks, market gardens and still undeveloped pasture was chosen for the site of the Franco-British Exhibition which took place from May to October 1908, organised jointly between the UK and France as celebration of the Entente Cordiale agreements signed in 1904. It was overseen by Commissioner General, Imre Kiralfy. This was the largest ever international fair held in the UK, visited by 8 million people during that summer.

An artificial lagoon was surrounded by a grand array of 140 buildings (above) in an eclectic range of ornate international styles but all uniformly white (which gave this district its nickname of White City). Pavilions, palaces and exhibition halls, linked by a grid of roads, bridges and canals, were designed by a team led by architect John Belcher, to represent the world’s nations and cultures, but also to highlight the achievements of British and French industry, achievements and empires. Viewed from today’s perspective they demonstrated imperialistic high- handedness and superiority, with ‘colonial villages’ including the Irish village and Senegalese ‘native village’, with imported inhabitants demonstrating arts and crafts and scenes from everyday life. There were also cafés, restaurants and funfair rides, including the Flip Flap on which, for sixpence, you’d be gently lifted up on a platform, from where you could experience dramatic views right across London to Crystal Palace, and west to Windsor Castle. Not exactly a white knuckle ride but still attracting tens of thousands of passengers.

The Olympic stadium was a last-minute addition to the White City site when London took over the 1908 Olympics from Rome (which had been due to host the event but had to pull out due to the disastrous eruption of Vesuvius in 1906).

In the years before the First World War, more big exhibitions took place here, including the Japan-British Exhibition of 1910, which brought awareness of Japan to the general public and ran for 6 months. A Garden of Peace was created by a group of Japanese and British gardeners in 1909, part of which forms the heart of this park and is all that now remains of the exhibition.

I walk through the gate into the Japanese peace garden. Abundant with trees, chestnut, willow, red oak and cherries. A tumble of rocks form the bed for a waterfall (a meagre trickle today), feeding the pond (above) which cuts in an arc through the lawns. The curve completes in a dry rock garden playground (below), a recent addition, which has boulder arrangements on shingle representing the story of crane and turtle on their voyage to Shangri La. A plaque on the site explains the design of this garden was inspired by dry gardens found in Zen temples:

“All dry gardens have a story behind them and each group of rocks plays a part in the story. Ours is a story of the Crane and the Turtle in their voyage to the Island of Shangri-La, a place of eternal happiness floating in the Ocean which takes the shape of the Chinese character for ‘heart’. The ocean is ‘Magatama’ a symbol for good luck. The Crane lives for 1000 years and the Turtle walks the world for 10,000 years. They both symbolise long life. This garden is a metaphor of a child’s journey though life, a materialisation of a desire for it to be happy and that is why it is a playground.”

I unpack my sketchbook and set up to draw. The day is breezy and, with every gust sissing through the still rain-wet maple leaves above me, a scatter of drops dot my page. An orange plastic bag sweeps across the grass and slaps into turtle rock, clinging fast. I retrieve it and drop it into a nearby bin. Sunlight breaks through the slate grey clouds and dazzles on the white pea shingle.

White City was commandeered for training troops during WW1 then gradually fell into disrepair. Much of the site was flattened in the 1930s to make way for the White City housing estates (the street names of Canada Way, Australia road and India Way are now the only reminders of the 1908 Exhibition). Some of the remaining halls were used for manufacturing parachutes during WW2, but were themselves replaced by the BBC television centre in the 1950s. At the same time Hammersmith Park was laid out below the dramatic modernist curve of the new building, with tennis courts and playground, and accommodating the remnants of the original Japanese peace garden. 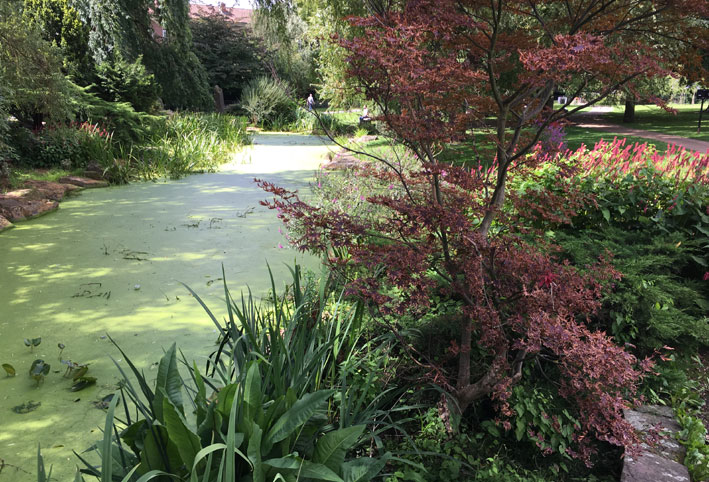 The garden of peace was improved for the Japan 2001 Festival and was restored to a more traditional Japanese aesthetic by Yoshihiko Uchida, Japanese landscape architect, and Satoru Izawa, an engineer and expert in traditional Japanese gardens and a team of volunteers, Funded by the Japan-British Exhibition 100 Committee, the local council, and numerous other supporters. Laid out along the lines of a Japanese Strolling Garden, similar to the Kyoto Garden at Holland Park, which I visited and drew in March 2017 (for Sticks in the Smoke 51) but with a more relaxed feel and freedom to wander. The restoration was completed in 2010, the centenary of the original festival.  In addition a new Japanese- themed natural and adventurous play area has been installed to provide a continuous play trail across the whole site. Other attractions include a maze, a climbing forest and three large play mountains.

The air weighs warm and humid. I wander down to the rock arch bridge and stand aside for a moment while a group of  chatting mums cross over with their children. I stumble back along the rocky ‘beachside’ through the cooler shade and set up to make a second drawing (see below). A notice has a description of the philosophy behind this piece of the garden landscape:

“Japanese gardens try to capture the essential spirit of nature. At the beach, where the pond represents a rocky seashore, the solid, yang element provided by the rocks meet the balancing yin element, the water.”

The pond has a thick pea soup blanket of duckweed. Green ice where twigs are caught along with other debris, juice cartons, cigarette packs and an empty scotch bottle. Blue shadows spread across the surface. Noise from the construction site, drilling, hammering, shouting. The continual hum and rattle of builders’ lifts. For a moment a the high pitched metallic screech of a drill rakes across the park.

I sit for a while to eat my apple. A dark movement catches at the corner of my eye. I glance across to see the silhouette of a rat under the nearest shrub. Stretching down for a drink.