These two garden squares are the green core of UCL (University College, London), the breathing spaces of this part of busy, bustling Bloomsbury. The morning is warm; pavements simmer as I enter the western gate to Gordon Square Garden. An intensity of brightness across these sun drenched lawns. Circles of students sitting cross legged on the semi parched grass. Some groups seem more organised, maybe alfresco seminars. Some more informal. Friends lunching together. A hum of voices; at times reaching a crescendo. A global mix of many tongues. Fast and urgent conversations. Soundtrack of stimulated minds.

I pause at the bearded bust of Rabindranath Tagore (the Indian poet, philosopher and Nobel Laureate, sculpted by Shenda Amery) and read the plaque inscribed in his own handwriting:

“Thou hast made me endless, such is thy pleasure. This frail vessel thou emptiest again and again, and fillest it ever with fresh life.

This little flute of a reed thou hast carried over hills and dales and hast breathed through it melodies eternally new. At the immortal touch of thy hands my little heart loses its limits in joy and gives birth to utterance ineffable.

Thy infinite gifts come to me only on these very small hands of mine. Ages pass, and still thou pourest, and still there is room to fill.”

Along the curving shaded southwest path to the Ginger Jules Cafe (was once the gardeners’ cabin). Outside there’s a man wearing a beret and holding a coffee. He has a (Siamese?) cat attached to an extending dog lead and is trying to stop it scrambling up a nearby tree.

Prior to the building up of Bloomsbury, the area that’s now occupied by Gordon and Woburn Squares was open marshy farmland, part of the Tottenhall Manor Estate.

As demand grew for housing in the late 17th century, the Dukes of Bedford who owned the land began to develop Bloomsbury as a desirable location for high end residences away from the crush and stench of the City. A basic grid of streets was laid out, interspersed with garden squares, a fashionable feature of the time. These two particular squares were fairly late developers: laid out in the 1820s and 30s. The finest Georgian houses were built around Gordon Square by master builder, Thomas Cubitt. Whereas, the terraces around Woburn Square were built by James Sim and his sons to be more functional. The houses were narrower, less imposing and were cheaper to rent, so this square lacked the grandiose status of other Bloomsbury Squares.

I take my coffee for a walk around the garden. A line of lime trees which borders the north east path casts pools of blue violet. At the top corner a memorial bust of Noor Inayat Khan (an SOE agent who infiltrated occupied France, but was executed at Dachau Concentration Camp in 1944 and was honoured with the GC, MBE and Croix de Guerre) is looking out across the lawn where a pair of girls are hula- hooping in the hot sun and laughing loudly at each other.

In places, the fringes of the park, under the spread of the plane trees, are deliberately left overgrown with shrubs and wild plants to provide habitats for wildlife and encourage biodiversity. At the northern end is a wilder pocket, like a piece of woodland thicket where several homeless men, with sleeping bags and possessions gathered around them, are sitting in a group, talking together and smoking.

The original design of the gardens was by John Russell, the sixth Duke of Bedford (Gordon Square was named after Lady Georgina Gordon, his second wife and Woburn Square named after Woburn Abbey, the Duke of Bedford’s country seat). He laid out both gardens with elaborate arrangements of curving paths, shrubberies and lawns, for the sole benefit of residents of the surrounding terraces. By the end of the 19th century the layout of both gardens had been made less formal, with serpentine paths and more natural looking shrubberies, borders and tree planting. 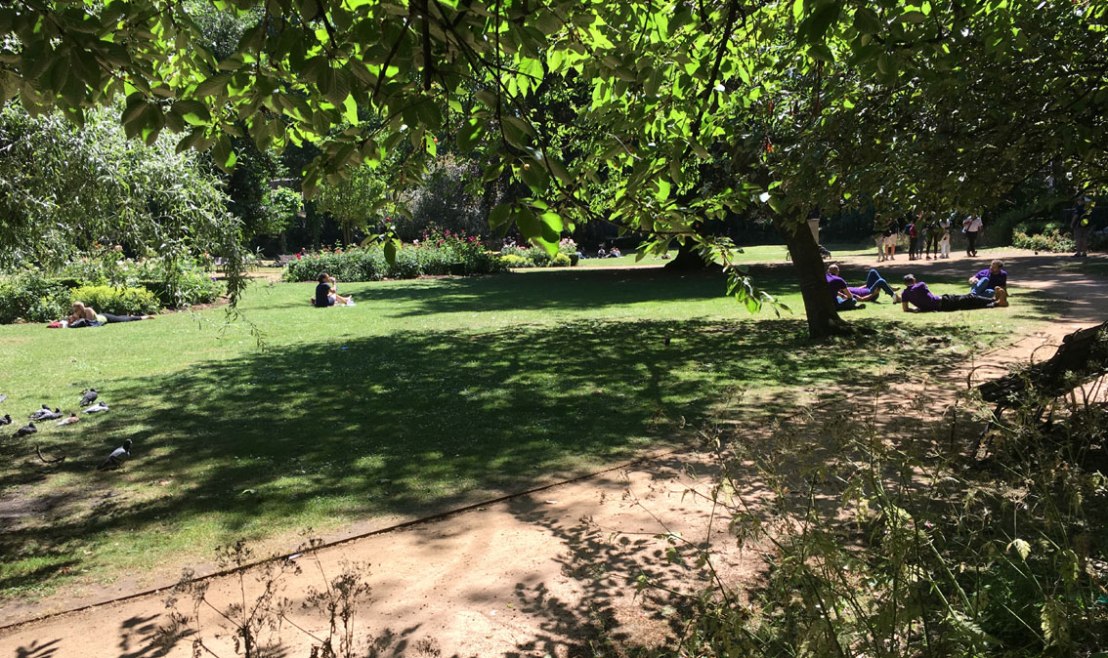 I set up to draw in the dust dry shade of a broad beech next to a central island rose bed. Colour rich and intense. A sporadic breeze cools my hot neck. The park fills with gatherings of young Education First (Summer Language School) students from around the world. A group of young East Asians sit on the grass to picnic just in front of where I’m working and glance at me nervously in case they’re in my view. They are but I decide not to include them in my drawing. They talk and laugh excitedly. One or two come over and glance at my sketchbook and nod and say ‘Very nice, very nice’. Summer school leaders circulate with placards reading ‘chocolate’ and ‘vanilla’ and shepherd their animated groups together and away for the afternoon’s sessions.

The University of London was founded in 1826. The following year it moved into the grand neoclassical Wilkins Building, just round the corner from here. However, over the next decades, with expansion and the need for ever more space for new educational roles and departments, by the twentieth century it had outgrown this and other sites in London.  In 1920 the Duke of Bedford agreed to sell a large parcel of his Bloomsbury estate, including these two squares, for the building of new University premises. 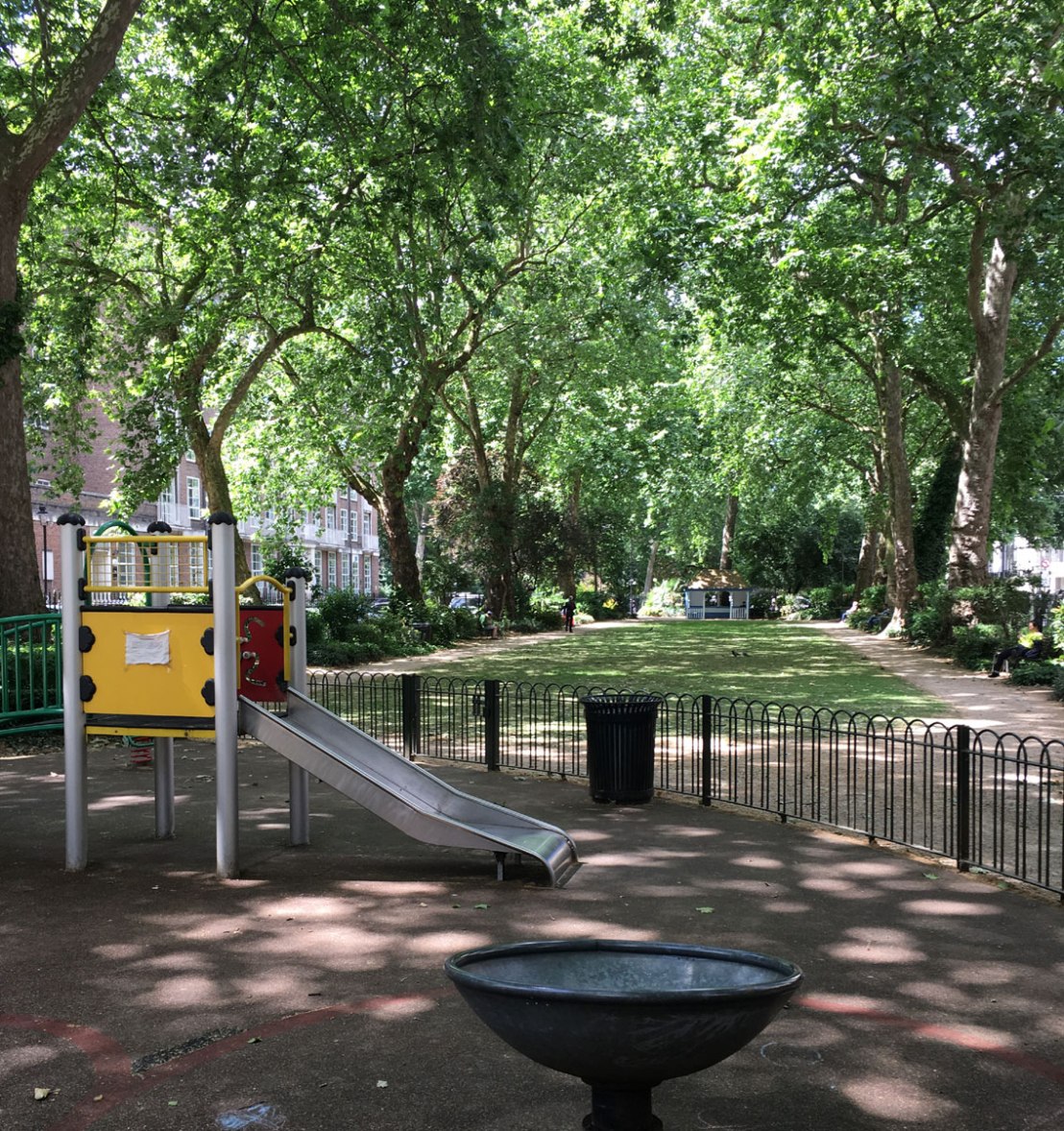 I pack my things and leave the teeming Gordon Square. The day has heated further and there is the scent of warm dust and diesel as I cross the road which separates the two parks. But the air freshens as I enter the shade of Woburn Square Garden. A patched pattern of light scatters across the long rectangle of lawn, transforming it into a giant rug laid out in a lofty hall. The leafy roof held high with great plane tree trunks for pillars.

This is a quiet, hushed space. A wooden shelter at the northern end sits proprietorially over the lawn. Like a cricket pavilion. Or a royal throne. A man in a shabby dark coat sits bent over in one corner, bags and things gathered around him. Lost in thought. Like a hermit. I don’t go in. Neither does anyone else. It would feel like an intrusion. Some people perch for a while on the benches which tuck in amongst the shrubs and bushes beside the perimeter path. Most people looking for a picnic or sunbathing place would surely opt for the more open and warmer lawns of Gordon Square. 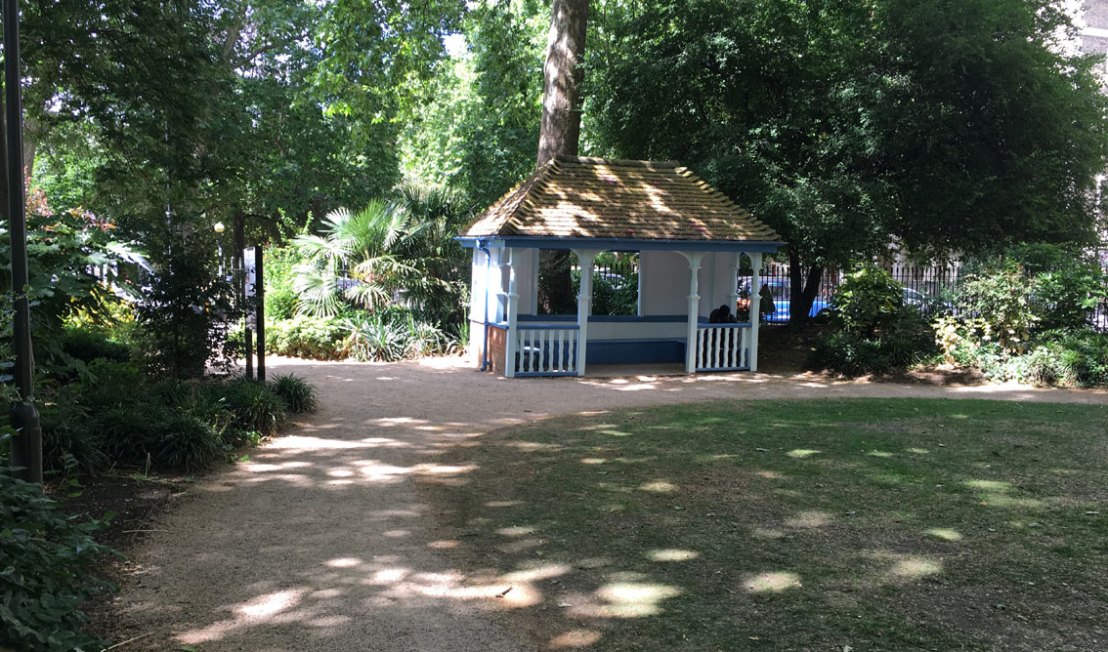 Further university expansion encroached on to Woburn Square in 1958 when the original terraces on its western flank made way for the Warburg Institute. And in 1972 part of the north and south sides were demolished for the Institute of Education and the School of Oriental and African Studies (SOAS).

I stroll down towards the children’s playground at the southern end. It’s deserted. But there is an onlooker: a figure standing near the southern gate, thrusting a peeled fruit (or nut) into the air: ‘The Green Man’ a bronze by Lydia Kapinska, sculpted in 1999 (he looks to me somewhere between Mick Jagger and Peter Pan!). Someone has given him a flat cap (see below), which I remove before starting to draw this sprite- like guardian of the garden. A plaque close by is inscribed with an extract from Virginia Woolf‘s ‘The Waves’ (Woolf lived at 46 Gordon Square from 1903- 07, where the circle of writers and artists who were to form the Bloomsbury Group first started to meet):

“My roots go down to the depth of the world, through earth dried brick, and damp earth through vein of lead and silver. I am all fibre.

I am green as a yew tree in the shade of the hedge. My hair is made of leaves. I am rooted to the middle of the earth. My body is a stalk. I press the stalk.

The roots make a skeleton on the ground, with dead leaves pressed in the angles”

A pigeon hops amongst the crunchy leaf debris under the railings. As I draw, I throw down a small crust from my sandwich but a blackbird darts down in a flash and carries it off before the pigeon gets a look in.

For a few minutes I’m alone in the garden. Well, apart from the man in the pavilion who’s there immobile and hunched over for the whole time I’m drawing.

A gentle gust sisses through the high foliage.

One thought on “Sticks in the Smoke 71: Gordon Square and Woburn Square Gardens”