The refined and polished residential streets of East Putney lead to the gates of Wandsworth Park. This broad, tree- fringed rectangular field opens out, sloping gently down to the Thames which runs below the north flank of the park. A sign at the west entrance directs cyclists to the left and I follow the arrow too, drawn by the watery shimmer through the line of great gnarly plane trees whose branches spread and wave at passing rivercraft. I amble along the wide embankment path, trying to dodge cyclists and mums jogging with buggies. Looking over the railings, the river slides silver grey under today’s bright cloud. The thick  line of trees opposite at the Hurlingham Club riverside reflect a dark ribbon in the water.

Once marshy farmland, cattle grazing down to the water’s edge. The village of Wandsworth grew up close to where the River Wandle joins the Thames a short walk east from this park (and from where Wandsworth gets its name). Travellers, traders and horse- drawn coaches would cross the Wandle here, on their way to Central London from the West country. 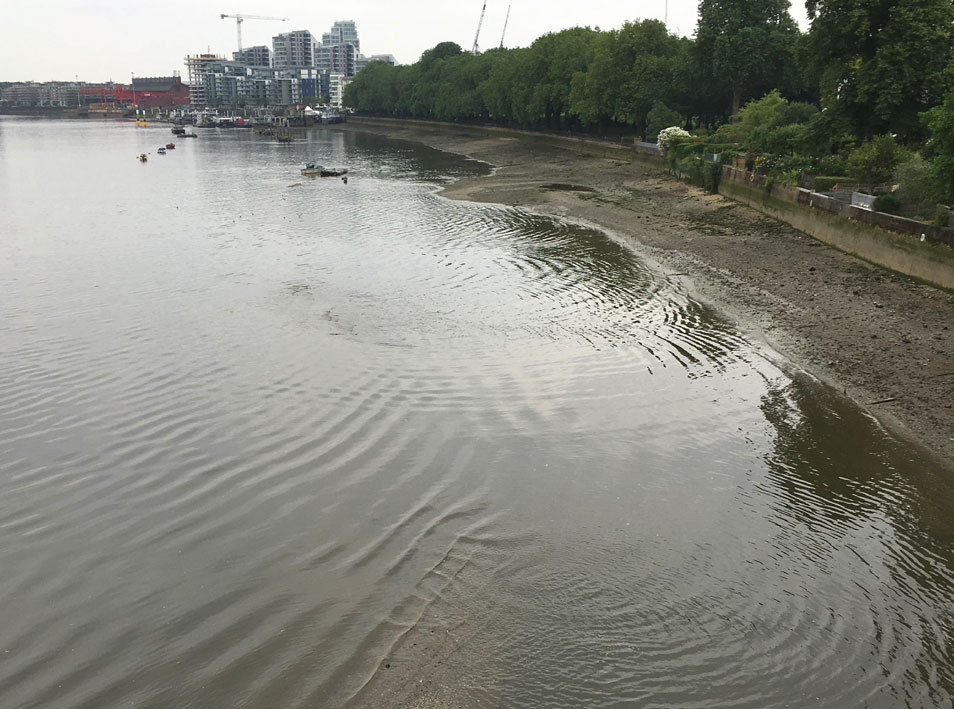 Since the early 16th century, Wandsworth offered settlement to consecutive waves of immigration, including Protestant Dutch metalworkers fleeing persecution in the 1590s, whose expertise contributed to the establishment of ironworks and brass foundries. Later, French Huguenot refugees settled here to work in the cloth mills on the Wandle and developed a hat industry for which the town was famous. Brewing began a stones’ throw from here at The Ram Pub sometime in the 16th century, making use of the ready supply of water. The Ram Brewery developed through the following centuries and was taken over in 1831 by Charles Allen Young and his partner Anthony Forthergill Bainbridge who founded the brewery and pub company, Young & Co which became a major employer in the town (large scale brewing only stopped on that site in 2006, when Young’s operations were moved to Bedford).

I lean my things against the river railings and stand my easel in the leaf choked gutter. I set up to draw the view downstream towards Wandsworth bridge, moorings of houseboats and quayside developments. Colourful and busy. Cranes punctuate the skyline, I count 12. A cool breeze from down river has a salty, seaweed tang. A quartet of Canada geese dip and paddle along the lapping silty strand. A rook paces the brick studded shingle then flies up to the railing and calls: “caw, caw, caw”. A distant answer from across the park: “cark, cark, cark!”

As I draw, a continual process of passing humanity. Amongst them: a man skitting along on a very rattly scooter, several pairs of women running and chatting, a man fast sprinting the 1k circuit of the park, a girl running in a flowery African dress, she circuits the park several times, cyclists, tourist groups. A man stops to look at my drawing while munching noisily,  Many dogs and their walkers. Dog names here seem to have a colonial feel: “Stanley, STANLEY! C’mon!”, “Here, Rupert!”, “WINSTON, STOP THAT!”

By the 19th century, Wandsworth was a densely built and cramped agglomeration of coal stained terraces, grimy streets, sprawling industries and heavily polluted creeks and river (and the setting up of the Wandsworth coal gas plant in 1834 didn’t help matters!). To address the health concerns of its population, London County Council (LCC) saw the creation of public parks as one of its primary concerns and when, in 1897, Wandsworth District Board were given the opportunity to buy this 18 acres of (formerly) allotment land for this purpose, they contributed a third of the purchase price of £33,000.

By the time I’ve finished my drawing, the tide has fully retreated. Houseboats have settled onto mudflats. A handful of waders are sifting the exposed riverbed. A heron stands in the ebbing tide above its shimmery reflection. A mudlark stoops with a metal detector and picks and dips his way amongst the mud coated stones and debris, occasionally stopping to pick up an oddment of treasure (?).

Wandsworth Park was designed and constructed under the supervision of the LCC Chief Officer of Parks Lt Col J J Sexby and opened in early 1903. The Thames was embanked and a riverside walk created. The overall park design responded to two main influences current at the beginning of the 20th century: firstly the increase in maintenance costs and the shortage of gardening staff, and secondly the growing interest in organised sports. So most of the space was given over to a large central expanse of grass playing field surrounded with walks. The park’s perimeters were planted with lines of trees, including plane, sycamore, holly and false acacia. A few ornamental flowerbeds were laid out near the main entrance.

The park’s layout has remained relatively unaltered since it was originally opened. A bowling green with a pavilion was added in the 1920s but this was removed a few years ago. In it’s place: Putt in the Park: miniature golf / crazy golf with a cafe. A bandstand sat close to the river walk but was demolished in the 1950s. There’s a busy children’s playground to the east of the playing field which was first laid out in the 1960s. 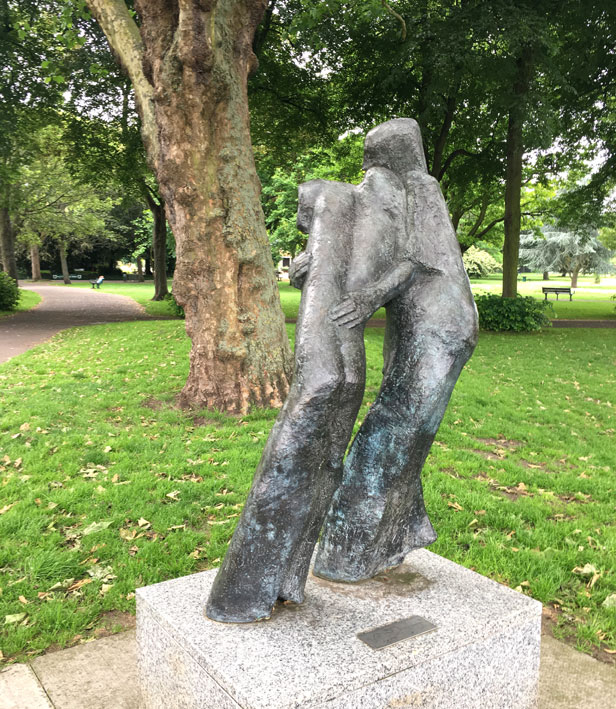 I make my way south to the top of the field. Pausing at ‘Pygmalion’ (above) one of Alan Thornhill‘s 9 eloquent bronzes on the Putney Sculpture Trail (another; ‘Nexus’ is at the top of the field’). A tractor mows back and along the long grassy ride. I walk across the straight path, fringed with more regular ranks of mature planes. Gaps have been filled with beeches. I stop and watch an energetic game of wheelchair cricket. On the field, nursery children are playing running games. Further on, enthusiastic young coaches lead school sports, yelling encouragement and clapping.

I buy a coffee from the Putt in the Park cafe pavilion, walk past the mini golf course, the tennis courts, flowerbeds, then to the top path where I can get a wide view across the field and its many activities. Along here, bordering the Putney Bridge Road, the park is edged with a procession of great old (non prickly) holly trees with a few rowans and maples. Its starting to lightly spot with rain so I set up to draw just under a holly’s spreading branches. Close to its base is an iron pillar-like structure (inscribed: “Fred Bird and Co, Engineers”), whose top disappears into the tree canopy. This turns out to be a Victorian sewer ventilator (commonly known as a ‘stinkpipe’).

Footsteps on the pavement behind the railings scrunch through the scatter of dried holly leaves. A blackbird lands very close to my easel and cocks his head to look up at me, hops around and picks at the fallen leaves, looking for hidden invertebrates. Suddenly screams from across the field and the blackbird flits off. A white shirted team of schoolkids are celebrating a win, jumping and high- fiving!

3 thoughts on “Sticks in the Smoke 70: Wandsworth Park”