I walk from Greek Street into Soho Square, 3 minutes north of Shaftesbury Avenue. Just on the corner here is the Georgian dark bricked House of St Barnabas (a charity established in 1846 for the homeless and needy). Looking up, its original red and gold glazed tile frieze, announces ‘House of Charity’. At the opposite corner is the elegant 1930’s Twentieth Century House, UK home to 20th Century Fox. Many of the other buildings in the square: old and porticoed,  bow windowed, or bold glass and brick, house the offices of various film, music and media organisations, including Dolby and The British Board of Film Censors. The area is a hub of the entertainment industry; the surrounding streets full of theatres, nightclubs, bars and sex shops.

The sky is a deep slate violet with low threatening clouds as I hurry across Soho Square towards the entrance to the gardens. There’s a feel and scent in the air of approaching rain. Referendum ‘Remain‘ campaigners have stationed themselves at this entrance to the gardens to hand out leaflets and ‘IN’ stickers. I take a sticker and fix it to my rucksack. As I go through the gate I turn to look back and see a group of American (or maybe Canadian?) tourists, all taking stickers too. I think they believe they need them to get ‘IN’ to the gardens!

Tall black iron railings outline this 1 acre of lawns and trees, subdivided by crossing paths. Another path runs all around, just inside the perimeter, with benches at close intervals, mostly occupied today. More benches around a wide paved area, just above the entrance. As I go up the three shallow steps, a man in tight black outfit lunges in my direction with arms flailing. I step aside and then watch him perform a kind of acrobatic dance, while softly chanting a repeated phrase.  I soon realise that this isn’t intended as a public performance; he appears oblivious to the throngs of people who are steering clear of his dance floor. It seems like a personal ritual. Or maybe a rehearsal. And then I make out his chant: “I’m soo beautiful, from my eyes right down to my cuticles…!” Hmm…I move on but am aware that he continues his dance obsessively for the whole time I’m in the gardens.

The gardens’ central feature is a crooked black and white Tudor- timbered lodge, placed where the paths cross, like a little gingerbread house. You’d think it was an original feature of this old garden but was actually built in the late 19th century, using 200- year old oak beams. In the 1920’s it housed an electricity substation. Today it’s used as a garden store. And its verandas provide welcome shelter for visitors escaping wet weather. It is also the fire exit for World War II air raid shelters which were built under the gardens to provide a Blitz bolthole for up to 200 local residents (the lease for this space was put up for sale recently for possible conversion into a glamorous subterranean bar or nightclub).

This square and surrounding streets occupy what was originally a tract of farmland known as Soho Fields, owned by the Earl of St Albans. The name ‘Soho’ is said to derive from a local hunting cry. Following the Restoration of the Monarchy in 1660, these gardens were laid out and and were called King’s Square to venerate the newly reinstalled Charles II. Ornamental trees and rose bushes were planted in symmetrical beds. A stately statue of Charles was carved in gleaming Portland stone by Danish sculptor Caius Gabriel Cibber in 1681 and was originally placed on a fountain in the centre of the gardens, where the lodge now stands. It was surrounded by sculptures of the river gods of the Severn, Thames, Tyne and Humber as a symbol of the King’s regained power and dominion over

the four corners of the land.  After 200 years, however, constant spray from the fountains had eroded Charles and given him a clown- like expression. He was taken down and retired to stand on an island in a lake near Harrow, but was restored and reinstated on the garden’s northern path in 1938: a second Restoration! (He still looks like a clown though!).

Through the 17th and 18th centuries, the square and surrounding streets were developed with grand houses and quickly became one of London’s most fashionable districts, with the embassies of Venice, Spain, Naples, Sweden, France and Russia occupying houses in the square at various times. A drift away by the gentry towards fashionable Mayfair residences in the early 19th century prompted a shift into the square by doctors, lawyers, architects and companies such as Crosse and Blackwell setting up office.

I walk around a mass of white and deep red bedding plants (alyssums?), which edge the path on one side of the lodge. I take out my sketchbook and lay it with my drawing things against the exposed root of a plane tree.  I draw towards the north gate and Soho Street, with the lodge in the foreground and, further down, the statue of Charles II as a bright as a ghost.

A few raindrops pinprick the paths but stop within minutes. At 3 o’clock, great bongs ring out from the red brick tower of St Pat’s (St. Patrick’s Catholic church) and, as if commanded, the sun pushes the clouds apart and dappled shadows spread across the lawns. St Pats squarely sits opposite the eastern entrance to the gardens, with Roman porch and columns. It has extensive catacombs that spread deep under the square. The ringing carries on for well over 5 minutes, the last bong seeming to bounce several times around the square until the babble of many voices takes over again.

So many people here, so wonderfully diverse. I can’t help people watching. And there are a lot of groups, including: 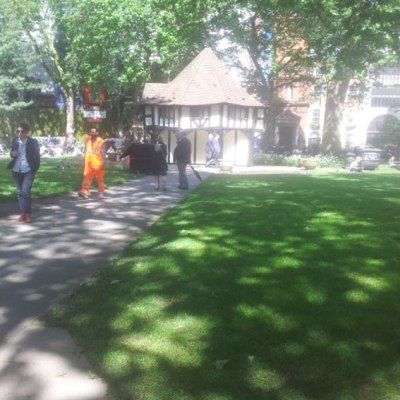 Construction workers from the Crossrail site at the end of Sutton Row (behind St Pat’s), wandering through the gardens like fiery beacons in their orange hi- vis. Two of them pause in front of the lodge and eat ice creams that drip on their boots.

A line of about 8 or 9 men sitting close together on a low wall, eating packed lunches. They’re all dressed entirely in white. Some with white caps. Maybe a bakers’ day out?

A line of rucksacked and yellow-baseball- capped schoolchildren (they sound Spanish). A tangle of excitement, they’re led purposefully along the path by a teacher with guide book. Two minutes later, they march back the other way!

A group of smiling women float past serenely in brightly coloured silk dresses and robes, fluttering like living flags.

Drawing finished, I walk away and a gang of marauding pigeons swirl and swoop down on the crumbs of my almond croissant.

I leave the gardens, walking past a bench (occupied), commemorating Kirsty MacColl (who died in a tragic accident in Mexico in 2000). This has become a kind of mecca for her fans. The inscription on the bench takes lyrics from her song ‘Soho Square‘: “One day I’ll be waiting there, no empty bench in Soho Square”.

5 thoughts on “Sticks in the Smoke 19: Soho Square Gardens”