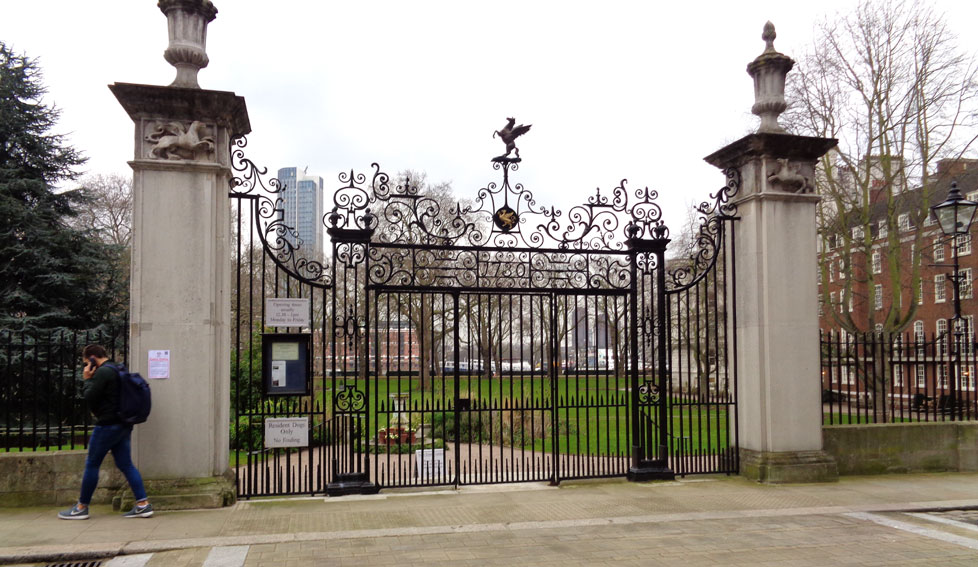 Although only open to the public for 2½ hours a day (12.30 – 3.00pm every day, except when very windy!), I’m loosely classing these handsome 3 acres as a public green space, even though the rest of the time they’re only accessible to the fortunate residents of apartments in the surrounding buildings, who have keys. 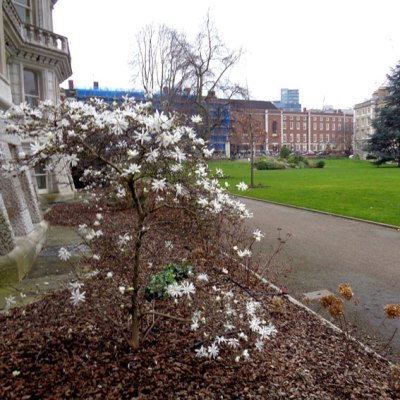 The Inner Temple is one of the 4 Inns of Court in London, offering training for the bar, regulation, and chambers for practising barristers and judges. This has been home to lawyers  since the 12th century. At that time the land was owned by the Knights Templar who founded their Temple here. They built a round church which still stands, thanks to much restoration and repair over the years (especially after extensive damage during the Blitz). After the downfall of the Templars in the early 14th Century this became established formally as a residence for lawyers and a centre for legal education. The Inner Temple was established on the consecrated land close to the church and the Middle Temple occupied unconsecrated land to the west of Middle Temple Lane.

Drop south from Fleet Street and through the medieval- like maze of narrow lanes, cobbled and fountained courtyards, worn stone steps and echoing alleys. Keep walking downhill, around Temple Church, past chambers buildings and academic halls until the gardens open out below, behind railings and the ornate, early 18th century gates. I join a gaggle of waiting people and look up at the black iron Pegasus (the emblem for the Inner Temple), rearing on the gate top.  The gates are unlocked at precisely 12.30 and we disperse along the perimeter paths. I walk past carefully tended beds, hoed and mulched, roses pruned, spring bulbs pushing through, winter flowering roses and euphorbias. The broad lawns have been recently mown, green stripes leading towards the row of tall planes that rise aloof from the Embankment clamour and river beyond.

From before the time of the Templars, on this land were orchards, planted on the fertile soil, south- sloping towards the riverbank. As buildings grew and spread and land was enclosed, terraces, paths and lawns were laid. Roses, decorative bushes and trees were planted. (Shakespeare claimed in Henry VI, Part 1, that the Wars of the Roses started in this garden when supporters of the rival Lancaster and York factions picked either red or white roses). The gardens have been redesigned and modified over the centuries, with changes in fashion, with boundary changes, and after the construction of the Thames embankment in the 19th Century.

I follow the path around the foot of the ‘Paper Buildings’ and find a sunken lawned area carved out of the slope. An old Black Mulberry dominates this space and forms a knobbly and twisted ‘Y’ leaning towards Kings Bench Walk which sits above the garden wall and railings. Violet and white crocuses have pushed through the rich red- brown bark mulch. A palm- skirted statue of a slave (by Jan van Nost), kneels on a plinth and carries a sundial on his head. I lay my drawing things out on the damp grass and draw the view framed by the mulberry, and a spreading cherry-tree beyond, towards the embankment boundary and the OXO tower silhouetted on the south bank. The air hanging above the river is a misty shroud. 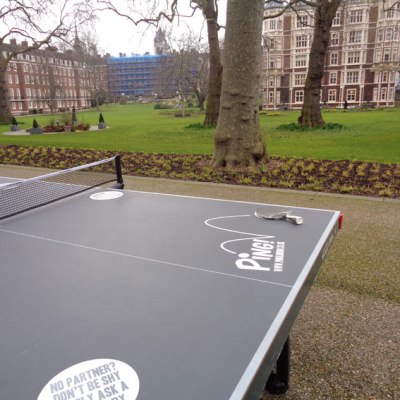 Smart- suited lunchtime walkers in twos and threes go by. Four young trainee barristers (?) head purposefully for the outdoor table-tennis table. Lilting birdsong trickles from a tree high up behind. A crow perches on a chimney pot and caws hoarsely. A wren hops the low branches in the nearby bed and chirrups angrily. Shouts and laughs from the table- tennis group carry across the lawn with clack of bat and ball. Pale pink petals from an overhanging plum branch gently fall like snowflakes and skim my sketchbook.

Drawing completed, I walk along by the eastern border beds: narcissi, roses, peonies and shrubs just budding on new red- purple winter stems. Then along the broad and majestic plane walk to the far corner. I find a spot at the foot of some steps by a locked gate and make another drawing back across towards warm- bricked Kings Bench Walk and Paper Buildings. On the other side of the gate, people carrying bundles of papers or trundling wheeled cases hurry between the stone gateposts of Middle Temple Lane.  The sky gets heavy, like slate, a cold breeze rises and there are flicks of drizzle. In front of me, dried hydrangea heads bob and sway like balls of crumpled parchment. The cries of seagulls from the river pierce through the din of embankment traffic.

I walk back up, past fruit trees blossoming against the warm walls of the tall Harcourt Buildings, to the entrance gates to find them locked! I’m imprisoned! I was too involved with my drawing and misjudged the time. Luckily, a man wearing a gleaming Pegasus badge, here to walk his dog, unlocks the gate for me and I’m set free.

4 thoughts on “Sticks in the Smoke 8: Inner Temple Gardens”